NEXT STORY: More About the Surf Shack – or – Back to South Pacific Cruise page

On my last full day in Australia before the cruise, I ferried may way back to Circular Quay and then wandered the streets of Sydney by the bay. Highlights included:

Aboriginal Musicians were set up on the wharf, playing the didgeridoo, dancing and selling hand-painted boomerangs.

I wandered over to the Opera House and had a beer in the Opera Bar. The wait staff were very nice there! I didn’t do the tour. If I had been with someone who was interested I would have, and I’m sure would have enjoyed it, but by myself it wasn’t at the top of the list. Beautiful place though, and I took lots of pictures of it on land and by ferry.

I stopped at several art galleries, which carry mostly aboriginal art – very interesting and even mesmerizing to just stand and stare at some of these pieces. One style is lots of tiny dots that form a larger pattern; another is small petal-like swatches of paint that form patterns. (I wasn’t supposed to take pictures, but I wanted to remember and share the style of the work found here.)

I spotted Fortune of War, Sydney’s Oldest Pub and decided to stop in for some Fish & Chips and a beer. Apparently it’s Australia’s version of a “Good Ole Boys” club, because the only female in the pub was behind the bar, and – though she did make eye contact several times – she never acknowledged me or attempted to serve me. I got the message loud and clear and headed down the street to The Rocks Café where I had some lovely Fish & Chips and a Pure Blonde beer (very light, and only 1.7 carbs)!

I don’t know what this place is. It was in the middle of a cluster of buildings containing businesses. Very interesting little space where i imagine people may go to have a quiet lunch. 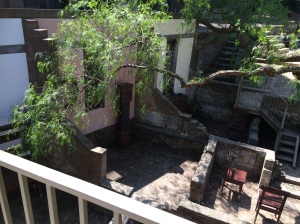 There are so many interesting little vignettes throughout Sydney.  Here is a courtyard where I enjoyed a glass of Shiraz.

After Shiraz I made a stop at a  Gelato shop (Salted Caramel, please!) and then headed back around to the wharf, where I listened to music performed by Pete Raven. Such a beautiful voice! I was really surprised at the sound quality here.

Next I headed to the Overseas Passenger Terminal, where tomorrow I will board the Celebrity Solstice! I dropped in at the Cruise Bar and had a (very pricey) margarita.

I have come to the realization that the cost of living in Sydney is much higher than in Nashville, TN. I could have looked that up ahead of time, but…I am the consummate “seat of the pants” traveler!

Now back across the bay to Manly by ferry for my final night at the Curly Surf Shack! I will be sad about leaving – it is such a serene space!

Now that I’ve written it all down, I realize I’ve had quite a bit to drink today! No wonder I was so tired when I got back to the shack!

NEXT STORY: More About the Surf Shack – or – Back to South Pacific Cruise page